Doorways to the Infinite

“I am the sovereign queen, the treasury of all treasures, whose breathing forth gives birth to all the worlds and yet extends beyond the – so vast am I in greatness.”

Devi Sukta (Praise Hymn of the Goddess) from the Rg Veda. 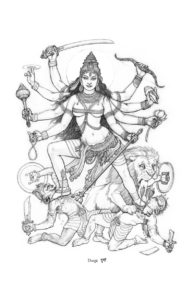 In the yogic traditions, the Goddess is considered the embodiment of power and of energy—the energy that enlivens the world, and our own bodies and minds. Whether we encounter the Goddess spontaneously or explore her deliberately, as a practice, the energy can open us to our own inner source of empowerment.

The yogic sages—especially in the branch called Tantra—anticipated quantum physics by pointing out that a subtle vibratory energy is the substratum of everything we know. Unlike physicists, however, yogic seers experienced this energy not simply as an abstract vibration, but as the expression of the divine feminine power, called Shakti. Reality, the tradition says, is Shakti’s dance, which takes form as our body, our thoughts, our perceptions, and also as the physical world.

The Hindu traditions are famously comfortable with the idea that the Absolute Reality, while formless, is perfectly capable of manifesting in divine forms. So Shakti, the formless source of everything, is understood to take forms—as goddesses, personifications of the different energies that make up the world and our own consciousness.

Whether we actually “believe” in goddesses, contemplating them allows us to become intimate with the vast impersonal forces of the universe.

Jung and his followers looked at the Greek gods as archetypes of universal psychological energies. The Hindu deities, in my experience, are just as much a part of our psychic structure. As with any powerful symbolic form, the Hindu deities represent, and in my experience actually can uncover, helpful psychological forces. They personify energies that we feel, but may never have thought to name or invoke.

This understanding lies behind the practice of deity meditation, which advanced practitioners in the Hindu and Buddhist tantric traditions have developed into a living science for transforming consciousness.  In these traditions, a teacher might suggest that a student meditate on a particular deity in order to activate qualities in his or her own psyche.

Deity meditation can unsnarl psychological knots—for instance, issues with power or love—and call forth specific transformative forces within the mind and heart. It puts us in touch with the protective power within us, and can change the way we see the world.

This is particularly true of the goddess energies—the devis or “shining ones” of the Indian tradition. So, looking for your inner goddess is not just a girl thing. The goddess transcends gender, which is why men as well as women tune into these vibrant forces. 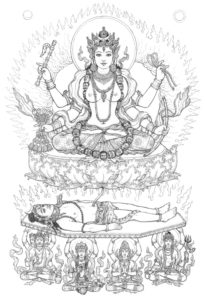 An obvious way to tap into goddess energies is by contemplating the Big Three Indian goddess figures, Durga/Kali, Laksmi, and Saraswati—the personified powers of strength, beauty, and wisdom. There are several legends about these goddesses’ origins. My favorite is the story of the goddess Durga and the demon kings, Shumbha and Nishumbha.

These two demons had taken over the world, and thrown the gods out of their own heaven. At their wits end, the male deities—like kids going to Mom to get them out of trouble– knelt in prayer, and supplicated Durga to defeat the demons.

Durga consented and took form as a gloriously beautiful woman, and flitted into the garden of the demon kings. Connoisseurs of beauty, the demons were delighted, and sent an emissary to invite her to join their stable of wives. “I’d love to,” the goddess said. “But there’s just one little thing.  When I was a child, I took a vow to marry only a man who can defeat me in battle. Silly of me, but you know how girls are.”

So, the demons sent their vast armies against her and in the course of the battle, the other goddesses—Laksmi, Saraswati, Kali—came out of Durga’s body and lay waste to the demon hosts. “Not fair!” cried one of the demon kings. “You said you’d fight us alone and look at all these helpers!”

“They aren’t helpers,” the Goddess retorted. “They are aspects of myself!” To prove it, she drew the other goddesses into her body, and went on to kill the demons single-handedly. 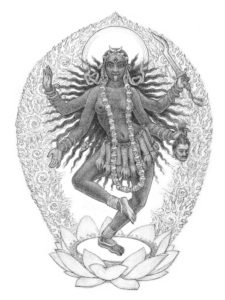 Durga, (her name means “hard to know, or hard to conquer”) is the cosmic warrior, the force within consciousness that battles ignorance and darkness. Durga is the power behind dramatic breakthroughs; she’s the strength you can draw on when you face challenging situations or deep backbends. Durga rides a lion, and her arms bristle with weapons, which she uses to slay an assortment of demons and other negative forces.  (For me, she’s also the patron goddess of the modern woman who juggles a job, children, and a yoga practice, and lives in a perpetual state of emergency while maintaining the calm of a Mona Lisa.)

In Durga’s most fearsome manifestation, as Kali (Black One), she is the consuming power of time, as well as the wisdom of deep meditation. Kali is the energy that takes us beyond the ordinary world. Kali’s is the love that removes every sort of veil, often by upending  our concepts about ourselves and our life. The image of Kalistands with her tongue stuck out, adorned with a garland of human heads, which, scary as they look, actually represent the sound-vibrations that manifest as thoughts, all of which are “devoured” in the silence of meditation.

Laksmi (“good fortune”), on the other hand, is the essence of everything we hold desirable. As the deity of wealth, good fortune, and happiness (her name is pronounced Luck-shmi, which is no linguistic co-incidence), she stands atop an open lotus flower, lovely as a Bollywood film star. One of her other names, Shree, means auspiciousness. Everything about Laksmi conveys beauty, goodness, and harmony.

Gold coins drip from two of her four arms, symbolizing her overflowing generosity. In some parts of India, shopkeepers and business people worship their money and ledgers as Laksmi, for she is money. But Laksmi also gives spiritual gifts—bliss, for instance, is a sure sign of her subtle presence.

Saraswati, (“flowing one”) dresses in white, and holds a beautifully carved stringed instrument called a veena, a book, and a rosary to represent the practice of mantra repletion. Her companion, the swan, is celebrated in Hindu iconography as the bird whose beak can separate the milk of wisdom from the water of material existence, for Saraswati’s great gift is the discernment that lets us find divinity in the world. 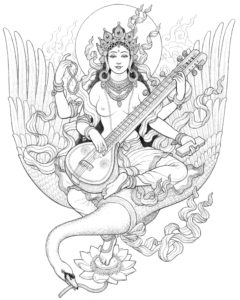 Each of these goddesses represents energies that are expressed in every arena of life— physical, intellectual, emotional, and spiritual. Yet traditionally, they are said to have two faces. When they aren’t understood or recognized as expressions of the divine, we can experience these energies in deluding, excessive, or even negative ways.

For example, Durga energy in its pure form is a transformative sword that cuts through obstacles and rights imbalances. That same energy can show up as aggression or harshness, as in the cutting voice of the boss from hell, or as a sword of judgment directed at others or ourselves. When Lakshmi’s abundance energy moves through the prism of ego, it can show up as greed or compulsive spending, as addictions to food or sex, as vanity or enslavement to pleasure. Saraswati’s power of divine speech becomes the endless flood of information that plays on all channels of the modern world, or the uncontrollable thoughts and fantasies that parade through the mind. 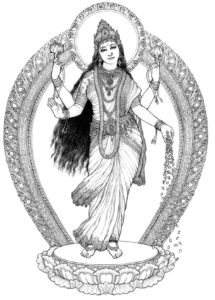 The practice of deity yoga is a powerful way to free these archetypal energies from the nets cast by our egos, so they can reveal themselves in their purest, most sublime form. Moreover, when we recognize and invoke the goddesses as sources of our own powers, we train ourselves to stop identifying so personally with our skills and talents and gifts, and to open up and trust the subtle current of divine energy that is always present within us, ready to guide and mold us if we let it.

This takes a certain radical trust and an experimental spirit; one that may feel strange if you’re used to identifying yourself as the doer of your action. Yet if you can embrace the idea of divine energy even experimentally, it is deeply freeing.

Find out more in “Awakening Shakti“ or through several of Sally’s telecourses. 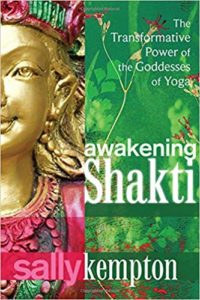